The city of our dreams 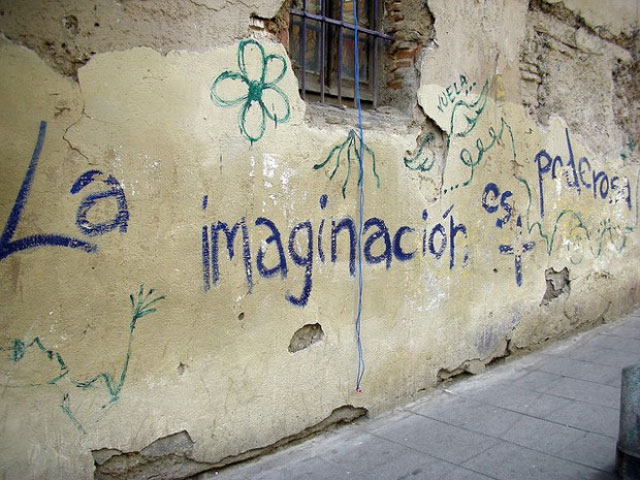 Today we would like to share with you a post by Adolfo Chautón, a geographer and consultant for the Collaborative City experience. The post was published in ecosistema urbano’s URBACT minisite and was translated from the Spanish original version here.

Let’s accept the crisis. Personally, I accept it convinced that it has an important systemic character and that it urges us to act because we are still far from seeing signs of the crisis bottoming out.

As a society, we have neglected all the signs that forecasted the collapse of the economic system for decades, and we have insisted in pursuing till the end a development model that, besides being deeply unfair and unbalanced, has shown itself to be exquisitely hypocritical, in particular for those of us who have tasted it to a greater extent.
The population of the so called developed countries have placidly flown with the tide of the promise of individual happiness, of the illusion of personal fulfilment, of the glare of the American dream….
The blindness caused by the flashes of the consumer society has driven us to an individualized existence, to the point that we have forgotten every social or environmental compromise with our environment. Meanwhile, we were begging to establish economic links with external powers we don’t even know, nor understand, and, of course we don’t control. These links have made us accomplices of this human devastation and environmental pillaging our mortgaged planet is suffering.

All in all, the greatest concern might not be that we have been tricked by this utopia, more or less consciously, but that we have thus accepted, without realising, a “mental programming” that compelled a collective renouncement to the ability to think, to be creative, to react and cooperate.

Our cities, reflexions of the souls of the societies that inhabit them, are living metaphors of all these processes.

Today’s city, derived from post-industrialization and globalization of neo-liberal economy and the consumer society, is a space conceived exclusively on the basis of economic profits, where the hegemony of the market has prevailed. The concept of creating city has been reduced to accumulating business and consumer centres and repeating buildings. There is no encounter, no identity, no compromise, no land, no city.

Simultaneously, furthermore, the space became polarized and fragmented into “production centres” and peripheral voids. Environmental and social imbalance was intensified and a swinging urban dynamic was established. Creativity and community survive in this dynamic because of their connexion to urgency and necessity, and never as sources of opportunities:

On the one hand, deficient environments multiply. Fighting for survival and for accessing the minimum quality of life doesn’t leave room for a dynamic other than out-and-out competitiveness. In this situation people can’t possibly have the smallest opportunity to dream of a better future or develop their own creativity as driving energy to bring a change into their lives.

On the other hand, saturated environments prevail. The concept of limit simply doesn’t exist and environmental and human congestion exponentially increases. Thus how, these environments become ultra-competitive environments forced to import resources (material and energy) and creative capital (creative classes), in particular from the periphery, because their own endogenous creativity is not enough for reinventing themselves at the speed imposed by their own demand.

Paradoxically, the two extremes coexist and these phenomena are mixed in a large number of cities throughout the globe. In both cases we witness a process in which competitiveness neutralises the changing drive and the capacity to design the future that are introduced by creativity and imagination.

By using creativity only on the basis of necessity, focusing on the resolution of specific, temporal and spatially partial problems, without realising we renounce to the possibility offered by creativity to foresee solutions from the global and integral appreciation of society, city and land dynamics.

Individualistic, short-sighted and submissive, us citizens have become the perfect consumers. We have learned to mingle with the land and the city by employing the logic of dissatisfaction that drives us to compulsively devour all sorts of resources: energy, land, creativity…, without even considering where they come from, in what conditions they were obtained, or that they are becoming more and more scarce.

This is the key aspect. We need to reinterpret ourselves as citizens and develop the basic capacities for getting (re)involved in our everyday environment, committing ourselves with its construction and becoming responsible for its behaviour.

Now is the moment to activate our collective resilience through social innovation processes that generate creative communities; communities that are capable of finding answers along the lines of global sustainability that are adapted to each local reality, thus including every individual talent into the collective project.

Using this collaborative capacity we can start off flexible and open processes for collective learning to enable us to develop a critical eye and to develop proactivity, and to enable us as well to acquire new habits that are more responsible and respectful with the environment.

Technology is on our side and provides us with a potential seen never before, and largely still to be explored, to share information, knowledge, creativity and experiences. Furthermore, we can georeference ourselves electronically as a medium to support the aforementioned processes.

We can take as inspiration a number of successful experiences both in the virtual environment: creative commons, p2p, wiki environments, etc…; and on the territory itself: some regions of the Scandinavian countries, a series of villages of Tuscany in Italy, Extremadura in Spain and a range of experiences in Latin-American countries, such as Colombia and Brazil, among others…

All these examples share a number of features: in their models they have introduced people’s creativity and imagination as a drive for development, and TICs as the drive for expansion and cohesion. Furthermore, all of them, and it is not by coincidence, appear in the periphery.

But, mainly, they all point out that investing in people and in the development of their capacities is within the reach of any land and that the place and the way in which we live can be constructed jointly. Sustainability, more now than ever before, needs the creativity of each one of us to propel the city of our dreams.

Man is the remedy for man
Wolof Proverb

The next session of Collaborative City experience will take place next Monday, April 25th from 18h to 19h (GMT + 1) on livestream.com/urbansocialdesign.

1 Response to The city of our dreams